Recently, the first of four warehouse buildings to be erected on the Hedeland plot next to the DSV Panalpina headquarters in Denmark was completed with environmentally friendly NOXOUT roofing. 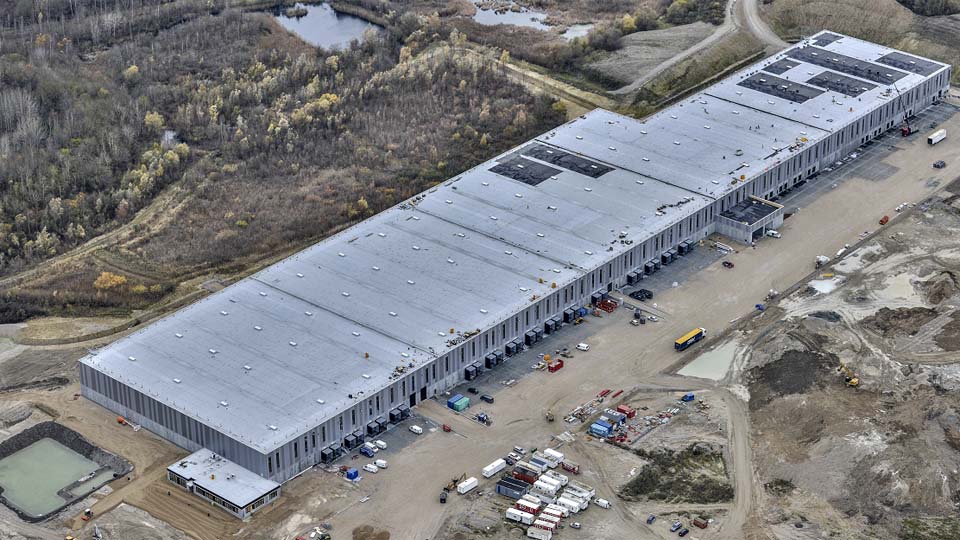 A special mineral-based coating helps to break down NOx particles emitted from the cars and trucks that pass through the area.

The four warehouse buildings collectively covering a ground area of 150,000 m2 will all have the special NOXOUT roofing.

The first building was recently finished with a 40,000 m2 NOXOUT roof, capable of breaking down 421,120 grams of NOx particles a year. This corresponds to the NOx emissions from a Euro norm 6 truck, carrying 8-13 tonnes, driving round the world 18 times.

This means that the new warehouse building is NOx neutral – provided all NOx particles from passing traffic lands on the 40,000 m2 roof.

The NOx particles are broken down due to a special coating of titan dioxide that acts as a catalyst when the particles land on the roof. Aided by sunlight, the coating transforms the NOx particles to nitrate, which is subsequently washed off the roof when it rains and then repurposed as fertilizer for the surrounding soil and plants.

Once the four buildings are all fitted with the NOXOUT roofing, a total of 150,000 m2 NOXOUT roof will be breaking down 1,579,200 grams of NOx particles every year. This corresponds to the NOx emissions from the abovementioned truck, only now it can make the trip around the world 70 times.

Cleaner air for the next 50 years

With this new type of roofing, the 150,000 m2 building complex, which will be DSV’s largest logistics campus in the Nordics, will help to break down NOx particles for decades to come.

“The NOXOUT roofing is capable of breaking down NOx particles over a period of 50 years – which is the estimated life span of the roof. Because the mineral is contained within the slate, the titan dioxide coating is not used up or washed away over time. The only thing to reduce the roofing’s ability to break down NOx particles is lack of sunlight, leaf cover or something else that prevents the particles from falling onto the mineral coating of the roof”.

According to Susanne Højholt, when the roof needs to be replaced – after decades of service – it should be disposed of in the same way as other types of asphalt roofing. According to the Danish Environmental Protection Agency, titan dioxide is not dangerous. The mineral is used for many different things, e.g. to produce white colour, UV filters in sun screen and colouring in cosmetics, boiled sweets and chewing gum.

Another positive is that the roof’s white surface deflects the rays of the sun and reduces heat – in contrast to standard black roofs. So, the building’s total energy consumption is reduced during the sunny and hot season.

The contract builder is DS Flexhal

Read more about the new logistics complex in Hedeland

According to Phoenix Roofing Materials, 1,000 m2 of NOXOUT roofing breaks down 10,528 grams of NOx per year. If you use ITD’s environmental impact calculator, you arrive at 0.56 grams per kilometre for the following vehicle type: